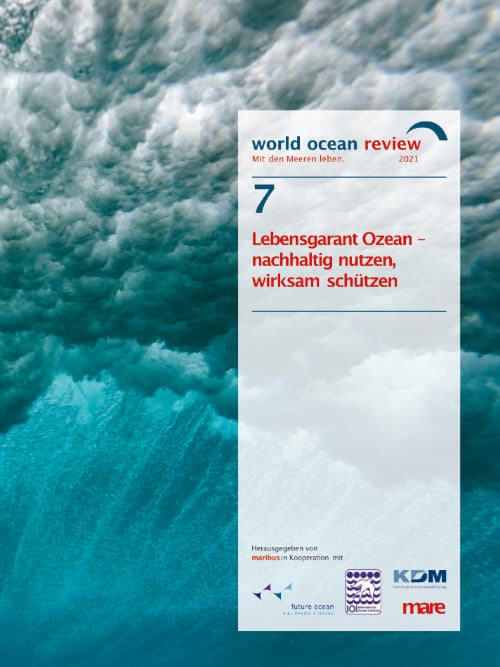 The ocean as a guarantor of life - sustainable use, effective protection

More than ten years after the publication of the first edition of the World Ocean Review (WOR), maribus gGmbH and its scientific partners, the German Marine Research Consortium (KDM) and the Kiel Future Ocean Network, are once again publishing a WOR that addresses the overall situation of the oceans. Its conclusion: Only together can we achieve a future for the ocean in which protection and benefit are compatible. To achieve this, important transformations must be initiated quickly.

The seventh edition of the World Ocean Review focuses on the effects of climate change on the physics of the ocean and on its biotic communities; the consequences of fishing, shipping, resource extraction, energy production and marine pollution; as well as the questions of how active substances from the ocean can be used and how the ocean can be managed in the future in such a way that both its protection and the participation of as many people as possible in its services and goods are guaranteed.

"More than ten years ago, a science-based, yet easy-to-understand and free-of-charge ocean report highlighting the complex threats to the oceans and possible solutions seemed to be an overdue necessity, as the ocean was mainly perceived as a transport and holiday medium," says Nikolaus Gelpke, initiator and editor of the World Ocean Review, founder of the magazine mare and board member of the International Ocean Institute (IOI). "However, due to the climate debate and the plastic waste problem, the oceans have now moved into the broader view of the public and thus also of politics - and we are observing that the complexity of processes such as ocean warming or overfishing increasingly requires fact-based explanations. Against this backdrop, the concept of the World Ocean Review has proved very successful."

Setting the course for a more sustainable protection and use of the ocean is a mammoth task, emphasise the scientific partners of the World Ocean Review 7. Nevertheless, they explicitly encourage us to remain confident and to engage innovatively, transformatively and collectively for a healthy ocean. "The management of the oceans has the great responsibility of implementing findings from science in such a way that the multitude of demands from society, the economy and nature conservation on the use of the oceans are coordinated in such a way that the greatest natural treasure on earth - our ocean - is preserved in the long term," says Prof. Dr Ulrich Bathmann, Director of the Leibniz Institute for Baltic Sea Research Warnemünde (IOW) and Chairman of the German Marine Research Consortium (KDM).